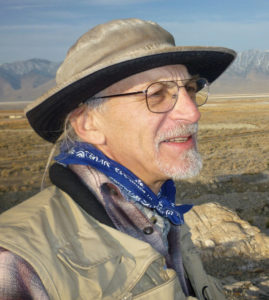 I was born and raised in Denver, Colorado. During the 1960s and 70s I engaged as an environmental activist in anti-nuclear, anti-war, Earth Day, energy efficiency and pro-renewable energy initiatives. Highpoints included organizing Earth Day activities in 1974 at the University of Colorado, and the successful passage of a Colorado Constitutional Amendment banning underground nuclear blasting for energy extraction. Also after participating in perhaps the first protest at Rocky Flats nuclear weapons plant near Denver, Colorado in 1968 and organizing protests from 1969-1978, Rocky Flats plant was closed in 1989 with the efforts of tens of thousands of citizens and activists.

Professionally (RESUME), I have had a 45-year career in renewable energy, beginning in 1973 as a student when I was director of the Environmental Center at the University of Colorado in Boulder, Colorado. Since then I have worked in the solar energy industry (1975-1979), waste management and recycling (1980s and early 90s) and biomass utilization field (1992-present).

Along the way I became fascinated with garbage and waste recovery and am knowledgeable in their applications beyond the landfill. My research has included waste management and lifecycle analysis (LCA) studies on behalf of industry that contrast reusable and disposable products. As a master garbologist I have researched many, and some esoteric waste streams, including diapers, municipal and industrial solid waste, agricultural and forest residues.

With the end goal of creating the technology to advance a cleaner and greener world, beginning in 1992 I co-founded PureVision Technology, Inc. with brother Ed Lehrburger and Richard Wingerson. Today, 26 years later the Lehrburger brothers lead a Colorado-based enterprise scaling up and commercializing an advanced technology for creating a renewable future. I continue to apply my expertise in the capacity of entrepreneur, corporate officer and senior manager to PureVision Technology, Inc. and our family of renewable and health-oriented enterprises including PureHemp Technology LLC and Pure Kind BotanicalsTM.